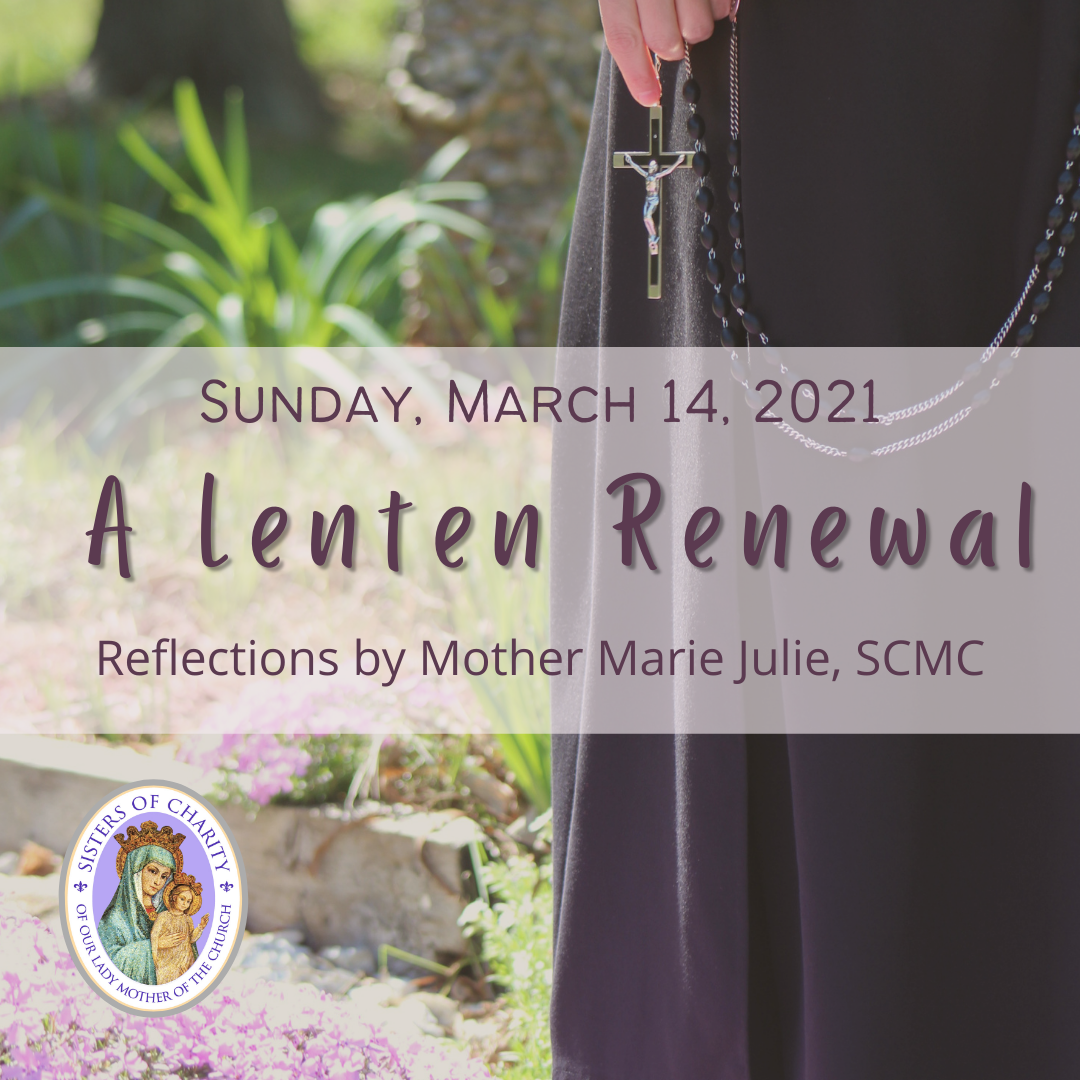 A Lenten Renewal:
Reflections on the Mass readings in light of our daily lives
By Mother Marie Julie, SCMC
The Fourth Sunday of Lent is called Laetare (rejoice, be joyful) Sunday. The word Laetare comes from the first Latin words of today’s Entrance Antiphon, which of course we pray in English: Rejoice, Jerusalem, and all you who love her. Be joyful, all who were mourning. This urging to step back from the penitential attitude that enveloped the ancient Jewish People comes because, as told in the first reading from the Second Book of Chronicles, 36:14-23, the new King of Persia, Cyrus, ordered the temple in Jerusalem, which had been destroyed, to be rebuilt. That’s a mouthful, but it encompasses years of exile and desperation during which they had nowhere to worship, and suddenly their prayers were being answered. This looks forward to our own day when, as we prepare for the Paschal Mystery of the passion, death and resurrection of Jesus, we are about to be saved once again from the tyranny of the evil one. Jerusalem is mentioned several times in today’s liturgy, reminding us that the Church, the New Jerusalem, will soon be born from Jesus’ wounded side as blood and water are spilled out on the Cross.
In the Gospel, John 3: 14-21, Jesus is engaged in conversation with a man named Nicodemus, a rabbi who was much revered for his faith. He comes to Jesus to test his own developing hope that Jesus was the long awaited Messiah. In this conversation Jesus foretells His death on the cross as He tells Nicodemus that He will be lifted up (crucified) even as the bronze serpent was lifted up in the desert of wanderings many generations ago. When the people in the desert sinned gravely, God sent serpents that bit them. Moses received the word from God to make a bronze serpent, mount it on a pole, and have the people gaze upon it. All who did so would be saved. And they were. This was an image of Jesus being lifted on the Cross; all who gaze on Him in faith are healed of their sin and they will be saved.
Jesus tells Nicodemus that we must not be afraid of the light—an interesting thought, as we usually tell people not to be afraid of the dark. But in fact, many sins are committed under cover of darkness (literal or figurative) so no one will see them. And once we sin, we find within ourselves an uncomfortable darkness that only the light of God’s love can brighten. In this passage, Jesus wants us to know that God so loved the world that He gave His only Son so that all who believe in Him might not perish but might have eternal life (John 3:16).
So what do the image of the temple in the first reading, and the conversation about sin and salvation in the Gospel say to us this Fourth Sunday in Lent? Perhaps we need to hear that the Temple of the Old Covenant, and the Body of Jesus given for us on the Cross to establish the New Covenant, show us that God reveals Himself to us in ways that speak to us wherever humankind is found at any moment in time. As the souls who worshiped in the great Temple of Jerusalem were called to fidelity through the prophets and the sacrifices on the altar in Jerusalem, so the death and resurrection of Jesus in the New Testament are the means of interior conversion and fidelity through the Holy Sacrifice of the Mass in our churches. How blessed we are.
And the darkness? We’ve had our share of it these last 13 months. Enough for a long, long time. Let us reach out these last weeks of Lent to find the light of Christ’s love in the many ways that He brightens our days.
Rejoice. Be joyful. Lent is half over today. Our salvation is near at hand.
Facebook
Twitter
LinkedIn
Pinterest
PrevPreviousSaturday of the Third Week of Lent
NextMonday of the Fourth Week of LentNext
“With Mary, our lives continually proclaim the greatness of the Lord and the joy experienced in rendering service to Him.”