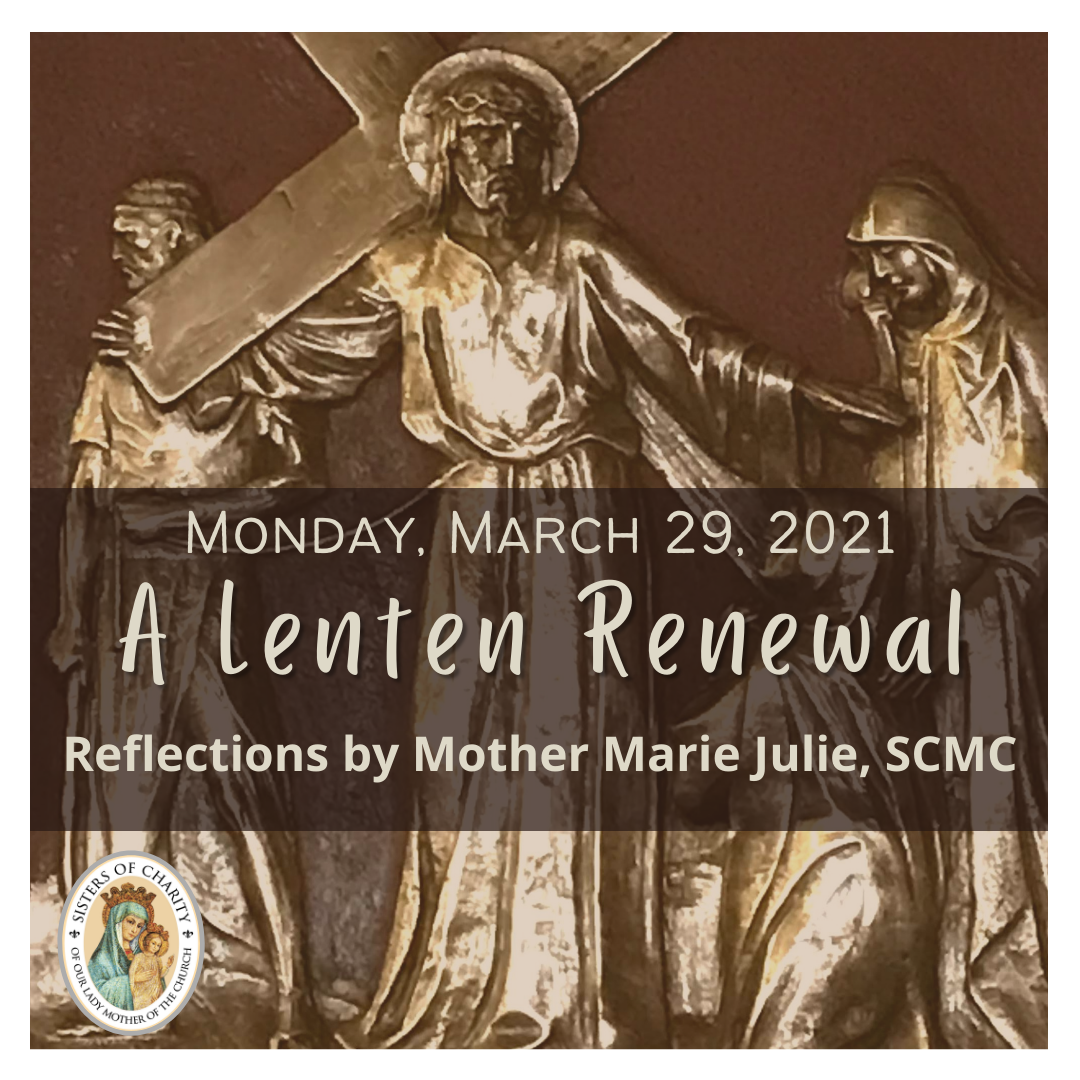 This will be long. But I’ve been waiting all Lent for this Gospel, so please bear with me.

Today we have a beautiful picture of an intimate moment between God and a woman in the persons of Jesus and Mary of Bethany (John 12:1-11). Here are some thoughts about the time, the setting, the action and the responses.

This takes place six days before He was arrested so the noose is tightening for Jesus. His apostles must be feeling the tension, because everywhere they go there are camps—the Jesus camp and the religious leaders camp.  Although His twelve don’t understand exactly how this will end, Jesus must have been ‘different’ these last days. And it would have caused at least a vague sort of existential dread.

They are invited to a supper probably in honor of Lazarus who had recently returned from the dead. They are there; Martha is serving again, and Mary, her sister, comes in with a liter (a ‘pound’ in one Gospel) of perfumed oil. She kneels beside Jesus and anoints His feet with the oil. Matthew, Mark and Luke also recount this moment, though the details are a bit different. They speak of an alabaster jar, which she broke. They all point out that it was large amount: if Mary breaks the jar, then she has to pour it all out over Jesus; there would have been no stopper, no way to save it for further use. The extravagant gift is not lost on the Gospel writers. The fragrance of the perfume permeates the entire house.

The sight of Mary anointing Jesus and wiping His feet with her hair would have been jolting even for His closest friends. A woman never touched a man in public, especially in such an intimate way. Perhaps they looked away in embarrassment for Him. Or they might have looked at each other, signaling the inappropriateness of the woman’s deed. John, however, sensitive to the discomfort of the past few days, must have thought, Now what? It’s true—they were never too sure what to expect when Jesus interacted with the soul of an individual: the expense of it, the daring of the woman, Jesus’ apparent disregard of the rules of social distancing between a man and a woman.

Finally Judas speaks up. His words shatter the moment on several levels. Why was this oil not sold…and the money given to the poor?

Can you hear the irony in these words? Here is a woman who obviously loves Him, performing a tender act without concern for the opinion of others, in the midst of so many rude comments and accusations against Jesus during the last few days. And this is such an insult to Jesus, as though He is not worthy of such lavishness. Besides this, Judas held the common purse and he used to steal from it! John and the others, for all their subtle disapproval, must feel terrible about this turn of events. They are struck dumb. They wait to see what will happen.

And Jesus does not disappoint. He rebukes Judas, saying, Leave her alone. He tells them that Mary has anointed Him in preparation for His burial. I think they are hardly able to finish their dessert. Tell me: who has the broken heart now?

There are many thoughts one may draw from this passage. I suggest only two:

First, that it’s a woman who takes the tension that has been curling around Jesus and His apostles like smoke from a campfire, and transforms it into an act of love for Him.

And second, there’s that alabaster jar. How much did it really cost, full as it was with costly aromatic nard?  Judas says three hundred days’ wages. And Mary didn’t just pour a few drops on His feet—that’s would have been enough—but she broke the bottle and poured it over Him (one writer says she anointed His head). She gave it all. She didn’t measure anything. She took all her possessions, as it were, and embalmed Him with them. Perhaps too, her sins were included in this gift.

What am I suggesting? Only this: that sometimes we may have to do the undoable, spend the unspendable, give the ungivable in order to show Jesus our love; step up to a place we have no right to be, and take our alabaster jar in which we have placed all our dreams, our hopes, our struggles, our disappointments, and, yes, all our sinfulness, and lavish it on Jesus to show him the depths of our love. If there is a voice within us that says we’re not good enough, or this is too much (or not enough), we just have to take that chance. Don’t count the cost, don’t consider the details. Just do it.

There it is. Just do it. Surrender everything to Him. Let us spend the next five days pouring everything we have been holding too close into our alabaster jar with the long thin neck. Then on Holy Saturday, that day of silence when the whole world will be in mourning as for an only Son (Amos 8:10), let us enter the tomb and break that jar so that we can pour every hidden part of us over the bruised Body of Jesus into all His wounds, as an embalming for His burial.

I’ll meet you there this coming Saturday. We won’t need a light. Our love will light the way.

Facebook
Twitter
LinkedIn
Pinterest
PrevPreviousPalm Sunday
NextTuesday of Holy WeekNext
“With Mary, our lives continually proclaim the greatness of the Lord and the joy experienced in rendering service to Him.”