Divine Dialogue of God with the Soul

Reflection for the Fourth Week of Lent, Laetare Sunday

Today is Laetare Sunday—the Latin word for rejoicing. We are joyful because Lent is half over and we are getting closer to the Solemn Feast of Easter. The Priest wears rose colored vestments, a symbol of joy. There is a touch of rejoicing in the readings, but it is subdued, since we are also closer to Holy Week, the saddest of the Church year.

Most parishes will hear the story of the Prodigal Son (Luke 15: 1-32), though there is an option for another Gospel. This parable is familiar to all of us, and there are certain parts of it that raise our hackles.

For example, it’s unthinkable that a son would say to his father, “I’m not going to wait until you die.  Just give me my share of the inheritance now.” It’s painful that the boy would take the money and run, especially to a faraway place without telling his father where he was going. And it’s terribly offensive to the Jewish ear that a young man would take a job caring for swine—tell it like it is: pigs!—which were unclean, never to be touched by a God-fearing Jew. Even a person without faith wouldn’t take on that task, Jesus’ hearers would think. Surely there would be no salvation for him! As for the end of the story, it does seem a little unfair that after the son’s egregious behavior the father would throw a party for him—the older son’s reaction seems justified, isn’t it?  And the father ignores the angry son’s arguments—‘You never did this for ME!’—and says instead, ‘But he was dead and he has come back! He was lost and now he’s found!’ It just doesn’t make sense. At first blush.

Mercy often doesn’t make sense, especially when we are asked to give it to someone else. And yet, how often we have sinned, and found the Father waiting for us, to welcome us with open arms when we repent.  Can we imagine our Father running to meet us when we are still a long way off? That would mean that He was watching for us. But we know He does that. I ask myself today, “Has there ever been a time in my life when I knew I should go to confession, but just couldn’t find it in me to go? Then, out of the blue, someone says, “Have you been to confession lately? You know, it’s a great feeling.’ ” That’s the Father running to me. Or something has been on my conscience for awhile, but I’m too embarrassed to put it into words to a Priest, too ashamed to confess it, then the Deacon at Sunday Mass says something, maybe completely unrelated to what’s been going on within me, and I’m suddenly, inexplicably, filled with a desire to go to confession? That’s the Father running to meet me while I’m still a long way off.

As for forgiving someone who has hurt me deeply, do I see myself in the older son? ‘It just isn’t fair that I have to forgive him! I can’t make myself do it.  Or, how could I ever forget what she said to me? She treated me so shameful!’ These are real life situations that happen to us along the way, and the prospect of forgiveness and mercy eats away at us until this pain become worse than the pain inflicted by the other person. In this parable Jesus asks, Can you forgive, as I have forgiven you, so many times?

No, it doesn’t make sense. But this story is about the way God wants to be with us, and the way He wants us to be with Him and with others. It can be quite a comforting story, despite the fact that it’s all counterintuitive.  God is like that. And aren’t we grateful, after all, that He is like that?

God bless you, and may these last three weeks of Lent continue to bring you closer to the Father

Who watches for you from a long way off and runs to embrace you when He sees you coming. 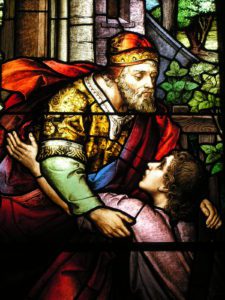