Friday of the Second Week of Lent 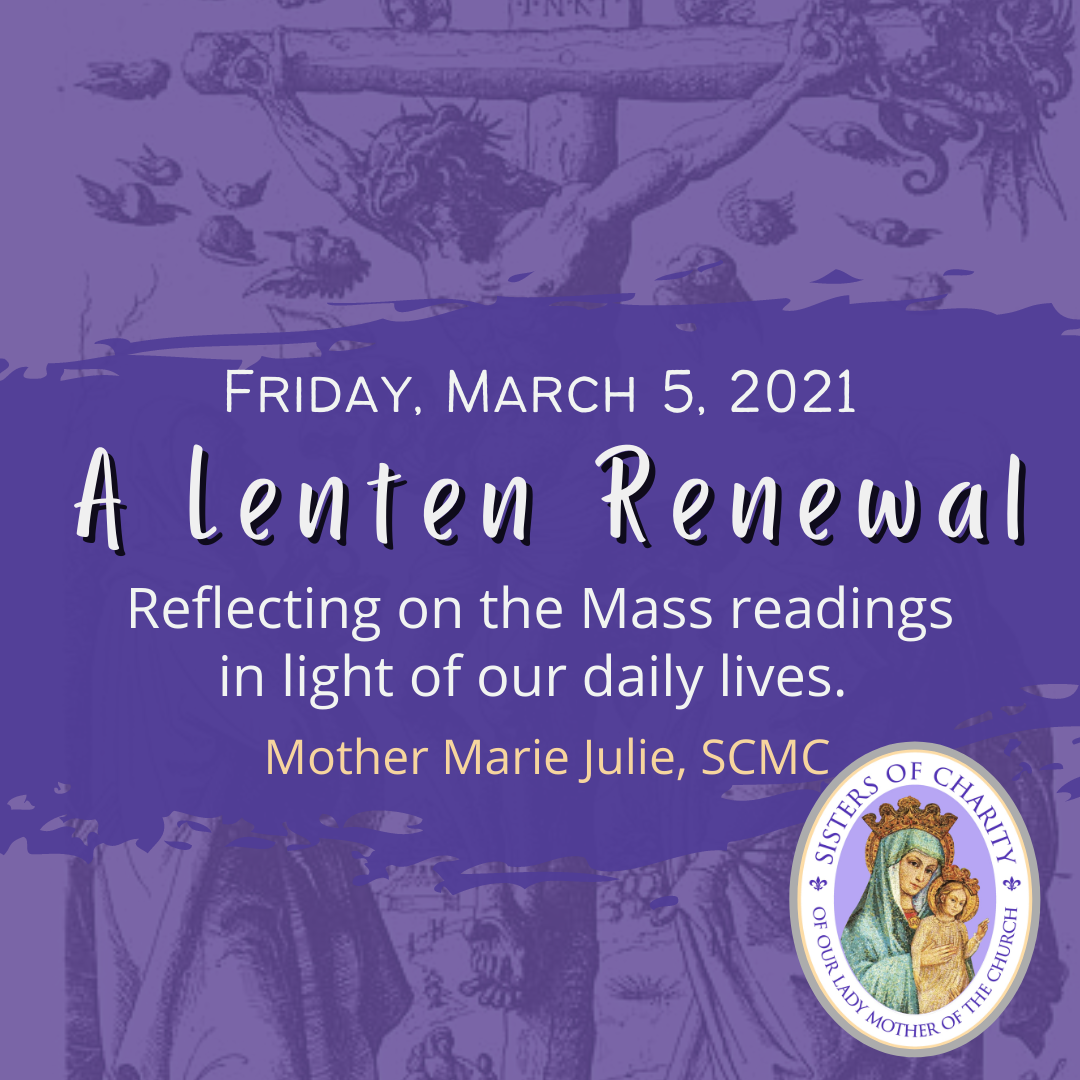 A Lenten Renewal:
Reflections on the Mass readings in light of our daily lives
By Mother Marie Julie, SCMC
My Dear Good People,
Today in the first reading from the Old Testament at Mass we hear the sad story of Joseph, the beloved youngest son of Jacob in the Old Testament. Joseph was a boy with dreams, not of success but of Godly things. His brothers, and there were many, were jealous of their father’s love for Joseph. One day Joseph was sent by his father to ‘check on’ the older boys who were off taking care of the livestock (one wonders if he was sent to make sure they weren’t slacking off on their assigned chores). The brothers saw him coming and threw him into a deep empty well, planning to let him die there and to tell their father that he was carried off by a wild animal and killed. But a caravan of Israelite traders going to Egypt came was stopped by the brothers who contrived to sell the boy to these men. They brought him up from the well and he was carried off not by wild animals but by the traders who paid the brothers for him—twenty pieces of silver.
The story ends there today at Mass, but we know that when he got to Egypt he eventually found himself working for Pharaoh as the caretaker of the royal grain (that meant the food supply for the people). There would come a famine soon, and Egypt was the only country around that had enough food for everyone and people came from near and far to buy supplies of flour from Joseph. In the providence of God, Joseph’s brothers came to him asking for food for their family, and did not recognize him at first.
The rest of the story in Genesis, Chapters 37-50, is intriguing and heart breaking—worth the read for this Lenten Friday. It shows the pain of the father of Joseph who mourned his loss (the boys didn’t tell him the truth, of course, till much later).
The parallels between the lives of the son of Jacob (also called Israel) and of Jesus are not hard to see, especially when one reads today’s Gospel Mt. 21:33-46). Both the Father of Jesus and the father of Joseph lose a son who was betrayed by those who should have loved them, and who received a handful of silver pieces for both; but in both Joseph and Jesus, the betrayal was the means of the salvation of the People of God. Oh, the mystery of God’s designs.
For us, the message is clear. Bad things happen to good people. God turns the bad to good. Eventually. Sometimes that ‘eventually’ is a long, long time in coming. But God never wastes suffering, and He asks us to trust Him, no matter what. How difficult trust can be especially when it involves our children or others whom we love.
Today, we bow in humble prayer, asking God to help us see His Will when it’s unseeable.
Here is a beautiful prayer that’s very hard to pray but I offer it to you. It’s from Father Charles de Foucauld who was murdered in the Sarah desert in 1916, and who will soon be canonized.
Let’s pray it together.
Prayer of Abandonment
Father, I abandon myself into Your hands. Do with me what You will.
Whatever You may do, I thank You.
I am ready for all, I accept all. Let only Your will be done in me and in all Your creatures.
I ask no more than this, O Lord.
Into Your hands I commend my soul. I offer it to You with all the love in my heart,
For I love You, Lord, and so need to give myself,
To surrender myself into Your hands without reserve,
And with boundless confidence, for You are my Father. Amen.
Facebook
Twitter
LinkedIn
Pinterest
PrevPreviousThursday of the Second Week of Lent
NextSaturday of the Second Week of LentNext
“With Mary, our lives continually proclaim the greatness of the Lord and the joy experienced in rendering service to Him.”